If you love wine you MUST see these flicks 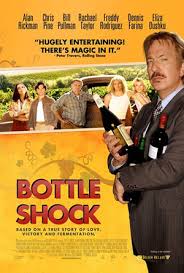 2008  The story of the early days of California wine making featuring the now infamous, blind Paris wine tasting of 1976 that has come to be known as “Judgment of Paris”.  Links to:

This film is available for instant view at Netflix. It is also available on DVD.

Mondovino is a documentary that shows the changes in the Wine Industry as a result of the globalization of the economy.

The San Francisco Chronicle  in a 2006 article lists the “Top 10 wine movies.”   Check it out to see if you agree.

The Daily Meal brings a selection of the “10 Great Movies for Wine Lovers.”

Have you seen a good movie on wine? Why not make a comment?