Tasting Overview
The main objective of this tasting is to explore some wines of Spain’s wine regions bisected by or near  the Camino de Santiago (Camino Frances).
We will have the opportunity to taste one white wine and three reds from distinct appellations along the Camino Frances.

From where these wines come from:

The Camino de Santiago (the Way of St. James) is a large network of ancient pilgrim routes stretching across Europe and coming together at the tomb of St. James (Santiago in Spanish) in Santiago de Compostela in north-west Spain.

Plan your Camino by Booking a Tour 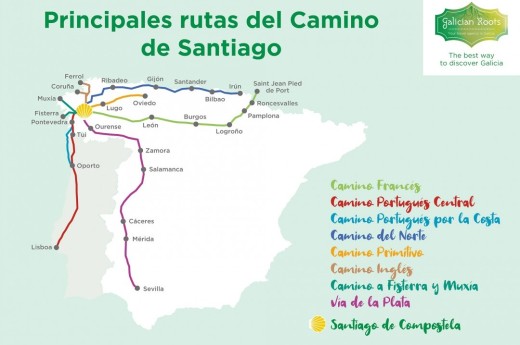 Yearly, hundreds of thousands of people of various backgrounds walk the Camino de Santiago either on their own or in organized groups. People who want to have peace of mind will benefit from an organized tour or a self-guided tour while many will opt to plan the camino on their own.

Origins of the pilgrimage

The history of the Camino de Santiago goes back at the beginning of the 9th century (year 814) moment of the discovery of the tomb of the evangelical apostle of the Iberian Peninsula. Since this discovery, Santiago de Compostela becomes a peregrination point of the entire European continent.

You may recognize some “Way of Saint James” pilgrims.

The Way was defined then by the net of Roman routes that joined the neuralgic points of the Peninsula. The impressive human flow that from very soon went towards Galicia made quickly appear lots of hospitals, churches, monasteries, abbeys and towns around the route. During the 14th century the pilgrimage began to decay, fact brought by the wars, the epidemics and the natural catastrophes.

The recovery of the route begins at the end of the 19th century, but it is during the last quarter of the 20th century when the authentic contemporary resurge of the peregrination takes place. There is no doubt that the social, tourist, cultural or sport components have had a great importance in the “jacobea” revitalization but we cannot forget that the route has gained its prestige thanks to its spiritual value.

Additional information on the Camino de Santiago could be found  here   (https://santiago-compostela.net/)   among many other good informative sites in the internet.

Information about the region

This is the first tasting of Biezo wines this year, therefore it’s described below. All the other wine regions are described in prior tastings for this year. Source:  https://en.wikipedia.org/wiki/Bierzo_(DO). 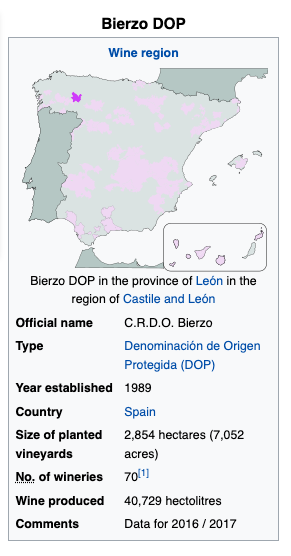 Bierzo is a Spanish Denominación de Origen  Protegida (DOP) for wines located in the northwest of the province of León (Castile and León, Spain) and covers about 3,000 km². It borders on the provinces of Ourense, Lugo and Asturias in the north and in the south on areas of La Montaña, la Cabrera and La Meseta, in Léon. The area consists of numerous small valleys in the mountainous part (Alto Bierzo) and of a wide, flat plain (Bajo Bierzo).
The DO covers 23 municipalities including the largest town of the area, Ponferrada (population about 70,000). The first written reference to the Bierzo region, whose name derives from the pre-Roman city of Bergidum, is from Pliny the Elder. The Romans
developed agriculture, introduced new crops including Vitis vinifera vines, and new technology such as the Roman plough. However, the greatest expansion of viticulture was related to the growth of the monasteries, especially the Cistercian order, during the Middle Ages. After centuries of production and after having achieved a good reputation in the  markets of Galicia and Asturias, the Bierzo vineyards suffered a terrible blow in the 19th century when the phylloxera plague practically wiped them out. There was a severe  conomic crisis which forced many people to emigrate. Production was slowly restablished thanks to the technique of grafting onto new world rootstocks and wine production gradually recovered to assume the significant economic role it had played in the past.
In 1989 the Bierzo DO was officially recognized.
Climate: The Bierzo DOP has a special macroclimate which is beneficial for viticulture. On the one hand it is similar to the climate of Galicia with regard to humidity and rainfall, and on the other it is also similar to the hot, dry climate of Castile. The low altitude also helps to prevent late frosts and means that the grape harvest is usually about one month earlier than in Castile. The average annual temperature is around 12°C, with the minimum in winter of 3.5°C and maximum in summer of 24°C.

The average annual rainfall is just over 700 mm, and the vines receive about 2,200 hours of sunshine per annum.

Soils: The soils in the mountains consist of a mixture of fine elements, quartz and slate. The vineyards are planted mainly on humid, dark soil which is slightly acidic and low in carbonates. The acidity ranges from 4 to 8.5, with values of over 6 in the valleys. Lime content is low, less than 3000 kg/ha. The carbon/nitrogen ratio is 11.9 in the valleys and 11 on the plains.

Grape Varieties: The wines produced under the Bierzo DPO must be made only with the varieties that are authorized by the Consejo Regulador (Regulatory Council).
● Red grapes: Mencía and Alicante Bouschet (Garnacha Tintorera).
● White grapes: Doña Blanca, Godello, Palomino, and Malvasía.

Notes on the Wines of the Camino

The second vintage of their top white is the 2019 Flor de Muga Blanco, produced with a blend of 40% Viura from red limestone and clay soils, 30% Garnacha Blanca from classical clay and limestone and 30% Maturana Blanca planted on sandy soils. It fermented in small barrels with indigenous yeasts and then matured in concrete eggs for three months and new barriques built in their own cooperage for six months. The wine is 13.2% alcohol and has a pH of 3.2 with very good acidity. There are only 37 hectares of Maturana Blanca in Rioja, of which they have eight.

It’s the same grape as the extinct Ribadavia variety from Galicia. The variety disappeared because it delivers very low yields, but they love the quality when it is picked fully ripe when it still keeps very good acidity. The wine is still a little oaky and powerful, from a warm and dry year, but the palate is electric and almost salty. This is a white that should develop nicely in bottle (I wish I had a time machine!), and as with the rosé, this feels like the finest vintage to date… only the second one! 11,892 bottles produced. It was bottled in December 2020.  WineAdvocate 94+ points 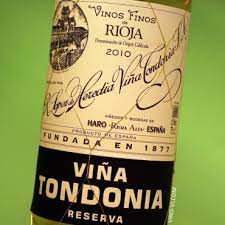 About as delicious as old-school Rioja ever gets, this is a joy now and will just get better all at just 13.0% alcohol. Pair it up with rich lamb or braised beef and you will  be very happy. The 2010 Viña Tondonia Reserva has all I expect from a Reserva from Tondonia, complexity, elegance and evolution, a developed nose with notes of forest floor and wild berries, herbs and flowers, a touch of iodine, brick dust and very fine, polished tannins. It has the seriousness and elegance of Tondonia. This is a blend of 70% Tempranillo, 20% Garnacho (they use the masculine form of the name of the grape) and 5% each Graciano and Mazuelo that fermented in the ancient oak vats from when the winery was created 144 years ago and matured in well-seasoned, American oak barrels for six years. Wine Advocate 96 points

The blend is similar to Perez,  Ultreia St Jacques, but all the fruit comes from a tiny plot of 100+ year-old, ungrafted, vines in Bierzo El Rapolao cru. The whole grape bunches go into open-top chestnut vats, ferment at their own pace with native yeasts, and then sit and soak for 30 days after fermentation with no sulfur while a film of flor yeast grows across the top. The free-run juice is drained into two used 500-liter and one 225-liter French oak casks to rest for 12 months.

If you are looking for a blockbuster, big and bold, wine this is NOT it! This is all about delicacy, silkiness, and purity, with highly polished tannins and a floral, blue-fruited, finish that does not quit. It is delicious now, probably at peak from 2024 and best enjoyed through the end of the decade.

It is not clear which vintage is better for the Ultreia range, as it depends on the wine. I think the 2019 Ultreia El Rapolao is better than the 2020, perhaps because it is from a warmer and riper year, when this wine tends to behave better. This is juicy, round and complete, with abundant, very fine tannins and the balance and stuffing to develop nicely in bottle. Wine Advocate 97 points Guimaro – Ribeira Sacra A Ponte 2019

Pedro Rodriguez great project – restoring this formerly family-owned vineyard to its former glory. Slopes range up to 80% here where Pedro and his father planted a classic Ribera Sacra field blend. Amazing amount of power from such a young wine and worth decanting if you are opening it soon.

The single-vineyard 2019 A Ponte was produced with grapes from vines planted in 2010, a vineyard that used to belong to the Guímaro family a long time ago that they had to buy again and replant. It is a blend of 30% Mencía and similar parts of Caíño, Merenzao, Brancellao and Sousón. All the grapes fermented together with 100% full clusters in closed troncoconic vats with a 50-day total maceration time and always matured in 500-liter barrels. It has less color and is rather light and ethereal compared to its siblings. All the 2019s are more closed than the 2020s, and the wines are more austere and, in general, have more depth and balance, with lower alcohol. This has 13% and a subtle nose of wild flowers and herbs, nuanced and complex.

This is superb for such young vines. 4,000 bottles produced.  Wine Advocate 95+ points

Pedro Rodriguez’s great project – restoring this formerly family-owned vineyard to its former glory. Slopes range up to 80% here where Pedro and his father planted a classic Ribera Sacra field blend. Amazing amount of power from such a young wine and worth decanting if you are opening it soon.

The single-vineyard 2019 A Ponte was produced with grapes from vines planted in 2010, a
vineyard that used to belong to the Guímaro family a long time ago that they had to buy again and replant. It’s a blend of 30% Mencía and similar parts of Caíño, Merenzao, Brancellao and Sousón. All the grapes fermented together with 100% full clusters in closed troncoconic vats with a 50-day total maceration time and always matured in 500-liter barrels. It has less color and is rather light and ethereal compared to its siblings. All the 2019s are more closed than the 2020s, and the wines are more austere and, in general, have more depth and balance, with lower alcohol. This has 13% and a subtle nose of wild flowers and herbs, nuanced and complex.

This is superb for such young vines. 4,000 bottles produced. Wine Advocate 95+ points.

Evaluation of the tasted wines by Club del Vino members:

The tasting took place before the wines’ prices were revealed and 15 participants rated them from acceptable to exceptional. The combined results established the preference order during the tasting, as follows: