The objective of this tasting is to expand the knowledge about the wines from Australia, selecting two very different regions in terms of climate and location, which are Southern and Western Australia. This tasting is a small sample of Australia’s excellent wines, the 5th most extensive wine-producing country and wine exporter globally.

South Australia is what California is to the USA: the wine state. From this state, three different reds were selected, two shiraz, and one cabernet, all produced by Davey Family from McLaren Vale. This producer has an excellent reputation for its outstanding wines, which also have the particularity of coming from grape parcels of the same Estate. This in-house production is relatively unusual, compared to the tradition in Australia, of shipping grapes or grape juice long distances from vineyards to corporate cellars.

From Western Australia, a Chardonnay from Margaret River was selected. This wine is a classic example of a variety that has remained, year after year, Australia’s best-selling dry white, produced by one of the most experienced winemakers in this region.

At the end of this post there is a link for a deeper view of the Australian wine production history. Check it out.

(The information below has been compiled from various internet sources) 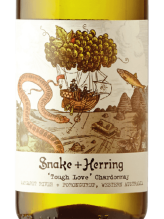 The wine. Critics have scored this wine between 89 to 93 points. Users have rated this wine 4 out of 5 stars. A graceful nose of grapefruit and orange starts off this wine and melds with salt, smoke, toast, and crushed stone. The palate slithers along with a slick textured but crackling with crunchy acidity and a long, oyster shell finish (Christina Pickard Rating 93).

The mid-palate seems sunny and varietal; the finish tends towards tart. Tales of two wines. Pear and stone fruit flavors lead to citrus and steel. It works in a juicy/refreshing way (TOTAL WINE Rating 90).

The winery.  Margaret River is situated in the farthest reaches of Western Australia. Relatively warm and dry, the region is cooled by breezes from the Indian Ocean. Age-worthy Chardonnays are regional specialties.

Snake (Tony Davis) and Herring (Redmond Sweeney) are a pair of old friends, united by their love of great Aussie wine, and their distaste for the conventional, the over-packaged and lazy in viticultural terms. Their focus is terroir-driven, and their experience has led them to deeply understand which slices of the west coast are most capable of delivering the goods when it comes to character, flavor and aroma. The results, too, speak for themselves: Snake & Herring wines show what can become of well-known grape varietals when left alone to do their thing in different landscapes, and their bottles are rarely anything less than fantastic and fascinating in equal measures.

Described by James Halliday as …”one of the most experienced winemakers in Western Australia”, Tony “Snake” Davis has over 25 years’ wine making experience across the renowned wine regions of Oregon, Burgundy, Beaujolais, Tasmania, South Australia and of course, Western Australia. Redmond “Herring” Sweeny is an accountant by trade and a sports mad wine addict by passion. Staunchly Western Australian and proud of it. Redmond is an experienced marketing professional with years of sales and distribution under his belt. In 2011 these two chaps met, collaborated and Snake and Herring, The Wine Odyssey was created.

Their wines are an expression of the individual sites and styles, and they employ innovative wine making techniques to get the best out of the fruit. Handpicking, whole bunches, small batches, wild fermentation, raw juices, and big barrels all work to build wines with texture and complexity. Nine years on, with a swag of trophies and gold medals to their name, Snake and Herring now have a Cellar Door on Caves Road in the heart of the Margaret River Wine Region.

The Red wines. All the red wines are from the Davey Family of wines, produced in McLaren Vale in Southern Australia

A curtain of toasty vanilla, cedar & bourbon oak at this nascent stage. The florals and dark fruit accents, anise & spice beyond, however, are dense and pure. This rich red simply needs patience, a vigorous decant or robust food. James Halliday – 94 points

This Cabernet Sauvignon comes from select parcels of Cabernet grown on both red and black soils of limestone on the Davey Estate Vineyard, matured for 15 months in a combination of new and used French oak.

The winemaking at this address is exemplary, to be sure…currant, black plum, a plume of olive to sage notes dusting gentle tannins. Yet it is the acidity that drives the length. James Halliday 92 Points.

The ‘D Bock’ is a small niche of the Davey Estate Vineyard that showcases the best Shiraz and Cabernet from the property, with the wines extensively matured in French and American oak hogsheads.

This Reserve Shiraz is from the most coveted ‘D Block’ plot of the Davey Estate’s vineyards. Cherry Bonbon aromas, bristling with intent. Fireworks across molten black fruit allusions, bitter chocolate, and black olive. Unashamedly bombastic, yet it pulls it off with style, the charred oak tucking in the seams while the show goes on, long and thick.  James Halliday – 94 Points.

As a grape variety is matched to exceptional terroir, over time certain districts or regions are vehemently recognized as benchmarks for their chosen variety or style of wine. One of the ten ‘Great Wine Capitals of the World’ alongside such renowned regions as Bordeaux and Napa Valley, McLaren Vale is best known for its powerful Shiraz and is home to some of Australia’s most iconic estates, including Molly Dooker, Clarendon Hills and d’Arenberg. Yet, McLaren Vale has seen an evolution over the last few decades as producers are taking advantage of the unique Mediterranean-like climate and cultivating other noble varieties like Grenache, Tempranillo, and Cabernet Sauvignon. Of these, Cabernet is now the second-most planted variety behind Shiraz and with this focus we’ve seen a surge in the production of ultra-premium styles—the best versions of Cabernet being lush yet refined, with supple tannins and “overtones of savory herbs and cedar against riper fruit at the core” (Wine Spectator).

Best of all, as scores and acclaim have increased, the wines remain moderately priced and unbelievable values compared to their Cabernet-based brethren in Bordeaux and Napa. One producer, the Davey Family, has demonstrated their ability to manage both Shiraz and Cabernet Sauvignon and is now consistently crafting outstanding, highly rated estate-grown examples of each.

During the 1990s, brothers Kym and John Davy brought their combined experience in winemaking, farming and business to continue and develop their McLaren Vale estate first farmed by their grandfather in 1957. With a goal of producing quality yet affordable wines that express the true character of the region, the estate produced the first wine under its Shingleback label in 1998.

James Halliday, Australia’s leading expert wine writer and critic, calls the estate a “success story since its establishment,” and describes their wines as “rich and full-flavored,” consistently scoring their wines 90+ points. Today the property is sustainably farmed and dominated by vineyards of Shiraz and Cabernet Sauvignon that takes advantage of their proximity to the Gulf St. Vincent, which moderates climatic conditions; warm summer days combined with sea breezes allow the grapes to ripen slowly and evenly.

The 2018 red wines are full bodied and deeply colored, showing intense fruit flavor with big round chewy tannins. Simply an outstanding vintage with the promise to be rated as one of the great years for McLaren Vale. Their true reserve wines, ‘D Block’ Shiraz and Cabernet, are only made in exceptional vintages and released in the United States under the Davey Family label.

Davey Family Vineyard has won “Most Successful Winery” at the McLaren Vale Wine Show five years in a row. It’s John’s attention to the small things—details like individual vines—that produces handcrafted, food-friendly wines. At first sip, you’ll find complexity, balance, and the kind of quality you would expect from much larger premium producers.

The wine tasting ranking order ranges from Acceptable to Excellent wines and was judged by 8 participants before disclosing wines price.

White and red wines were rated individually by 15 participants whose combined results established the preference order during the tasting as follows:

Information compiled and edited by Jorge Claro and Cristian Santelices, from various sources such as vineyards.com, wine searcher, wineaustralia.com and winepaths.com.

In Australia, wine is produced in every State, with more than 60 designated wine regions totaling approximately 160,000 hectares. The main vineyards of Australia are in six different wine regions: New South Wales, South Australia, Victoria, Western Australia, Tasmania, and a smaller area in Queensland. Australia is the 5th most extensive wine-producing country, with around 1,400 million liters of wine produced, although the country’s consumption represents less than 40% of the production, making Australia the 5th largest wine exporter, with 711 tons of wine. Australia produces over 160 grape varieties distributed on 146,244 hectares across all six states.

Australia’s wine regions are mainly in the southern, cooler parts of the country. The wine regions in each State produce different wine varieties and styles that take advantage of their particular Terroir, such as climatic differences, topography, and soil types. Wines are often labeled with the name of their grape variety, which must constitute at least 85% of the wine.

One of the most notable aspects of Australian wines is consistency. Every bottle reaches a certain minimum, perfectly acceptable level of quality; it comes from the heavily irrigated vineyards in the country’s interior. Almost two-thirds of every year’s grape harvest is grown on one of the three extensive irrigated areas where canalized rivers turn bush into orchard and vineyard. These areas in decreasing importance are Murray Darling (or Valley), which straddles the Victoria-New South Wales border; Riverland and Swan Hills; and Riverina (Murrumbidgee).

The Australian wine industry is crucially dependent on the Murray River. The crescent pollution of the river and the high salt level in Australia’s underground water, that little good-quality irrigation water is the principal constraint to converting one of the driest countries on the earth into one big vineyard.

Australians believe in economies of scale. Despite the feverish planting of vines at the end of the 20th century, there is a shortage of wineries. This approach aligns with the tradition of shipping grapes or grape juice long distance from vineyards to corporate cellars. The produce of distant vineyards is often blended into a single wine. Nevertheless, the Australian wine map has been changing fast, devising its appellation system, Geographical Indications, called GIs.

The wine regions are primarily located on the southern coast of Australia, which offers lower temperatures and rainfall. Still, Queensland has been developing its wine industry, centered on the cooler western slopes. Much of Southeastern Australia has a Mediterranean climate, which wine grapes enjoy. Melbourne is on the same latitude as Cordoba, Spain. Strong wines full of sugar but lacking acidity are the ones typically from Australia. Australia’s most planted variety is Shiraz and is recognized as what Australia does best in terms of red wine.

Read the Note prepared for this tasting by Jorge and Cristian with plenty more information on Australia’s wine production stats and its wine regions.

Wines from Australia    by Jorge Claro and Cristian Santelices

Information Technology, Management, Project Management and Public Administration are areas I am familiar with. I am also interested in photography, wine, sailing, politics, economics, and economic development.
View all posts by Cecilio Augusto Berndsen →
This entry was posted in Wine - Vino - Vinho. Bookmark the permalink.