Tasting Overview: This tasting focuses on two red blends, one from Argentina and another one from Chile. These two countries became well known in the wine world until a couple of decades ago for their red varietals. Cabernet Sauvignon and Merlot in the beginning followed by Malbec (Argentina) and Carmenere (Chile) lately. However, as new varieties were planted, both countries started taking a greater interest in Bordeaux-type blends made from high-altitude grown grapes that give unique crispiness and freshness to the wines. Both countries have made remarkable inroads in the market of red blends, producing wines of superior quality and complexity, quite often better than to those of the varietals that go in the blends.

The menu is up to each participant discretion

The Wine: Winemaker Notes. Clos de Los Siete 2017 is deep red in appearance shot through with purple glints characteristic of Malbec. On the nose, its intense and complex aromatic expression delivers subtle notes of fruit and spice. On the palate, the delicate tannins are ripe and silky, and combine with appealing freshness. Well-balanced in structure, full-bodied and offering typical freshness, the wine showcases the charming, elegant style ever present in Clos de Los Siete. Blend: 52% Malbec, 21% Merlot, 15% Syrah, 7% Cabernet-Sauvignon, 3% Petit Verdot, 2% Cabernet Franc.

The Winery: The grapes are sourced from seven vineyards located in the UCO valley in the foothills of the Andes, south of Mendoza. The vineyards are owned by four different families. The wines are blended by Michael Roland, the originator of the project.

Uco Valley is considered to be what the Bordeaux area is to France and the Napa Valley to the US. The soils are made up of pebbles, clay and sand. One meter (3.3 foot) down, the vines’ roots penetrate a bed of gravel, which provides natural drainage. Water, which is indispensable in this sun-bathed country, comes from springs fed by melting snow and glaciers up in the Andes Mountains. The weather here is very dry with widely varying temperatures between daytime and night, which is especially beneficial for concentrating tannins and color in the fruit.

The vines are oriented south/south-west and soak up the sunshine whatever the season. The vines are cultivated just like for a Bordeaux grand cru classé with green harvesting, leaf removal, managed 1- to 3-hectare (2.5- to 7.5-acre) plots and very strictly controlled yields. 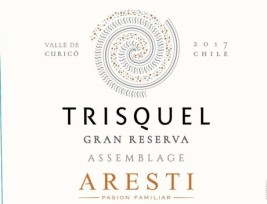 The Wine: Winemaker Notes: This wine presents an intense, dark ruby red color. On the nose, it is complex showing fruity notes to plums and blackberries with flowery aromas combine with mocha and coffee hints from the barrel aging. Sweet and juicy in the mouth, it has nice structure and soft, ripe tannins. Ideal for lamb, red meats, aged cheeses and nuts. Blend: 44% Cabernet Sauvignon, 42% Syrah, 14% Petit Verdot

The Winery: The Aresti family started growing grapes in Curicó valley in 1951 but it took them almost 50 years to start making their own wine. Today the founder daughters run the show. The Aresti winery and its vineyards remain in Curicó, Chile – about 140 miles  south of Santiago – where they have four different vineyard sites and produce a wide range of wines from rich Bordeaux blends to fresh Semillón.

Viña Aresti is managed by a team of leading professionals with strong commitment and extensive knowledge of the industry including two Agricultural Engineer-Enologists. In 1999 major renovations were undertaken, state-of-the-art technology was introduced in the winery, modern processing techniques were incorporated, and an underground wine cellar was built for premium wines. 2018 marks the completion of extensive investment plan under which vineyards were reconverted, new plantations were developed, new winemaking techniques were introduced and a world-class bottling line was implemented.

Compiled and edited by Jairo Sanchez and Alfonso Sanchez

Chile began to climb the global wine ladder in the 1980s and ’90s, with varietal Cabernet Sauvignon and, to a lesser extent, varietal Carmenère.. But these days, it is Chile’s blended red wines that have emerged as its best wines. Cabernet Sauvignon and Carmenère remain dominant players in the overall blend, but often Cabernet Franc, Syrah, Carignan and Malbec along with other grapes including Petite Sirah and Petit Verdot are included. Chile is in the midst of a red-blend moment, Bordeaux has long been about blends, as has ­the southern Rhône. In the New World, Australian winemakers are known as big-time blenders, while across the Andes in Argentina, blends consisting of Malbec, Cabernet Sauvignon and other red grapes often outperform varietal Malbec. What a good blend offers are aromatic harmony, textural balance and greater depth and complexity of flavors.

Some of the blends to look for are:

Adapted from: Andrew Catchpole, at therealargentina.com.

Argentina’s winemakers are increasingly revealing their hand as masters of the art of blending. This is especially true of their top red wines where the aromatic purity of high-altitude Malbec is proving a perfect partner with a host of Bordeaux and other red varieties, delivering world-class, elegant and age-worthy wines.

Argentina’s leading blends are still evolving as winemakers, adding a splash of Cabernet Sauvignon here, a dash of Petit Verdot there, perhaps a slug of Tempranillo or a soupcon of Shiraz elsewhere, in the search for ever greater Malbec-based expressions of Argentine terroir. And this vinous alchemy is producing Argentina’s greatest wines.

It is not that Malbec alone does not stand tall among the great wine of the world. But delve a little deeper into the best of the bunch and often you will discover a spot of judicious blending at its core.

This can be a complimentary partnering of grapes from cooler, higher vines, and a warmer spot, such as Argento’s vibrantly aromatic Reserva Malbec, Septima’s seamless Dia Malbec, or the intensely concentrated Broquel Malbec from Trapiche, drawing on fruit from Uco sites between 950 and 1350 meters above sea level. It is all about bringing extra complexity to the wine.

It turns out that Malbec is a fantastically flexible friend to a host of other varieties too. You would not necessarily know it from the label, but many Malbec wines, like Jean Bousquet’s Reserva, have a modest splash of Cabernet and even Syrah in the blend. However, at the top end, Argentina’s finest red winemakers are unabashedly open minded about their ingredients for introducing elegance and complexity into the final bottle.

Some good examples are:

Elsewhere, Cabernet Franc, Bonarda, Carignan and even Touriga Nacional have also made their mark.

Blends are without question at the heart of the vast majority of the best Argentina wines. Where Argentina triumphs over Bordeaux, though, is in what Argento winemaker Sebastián San Martín describes as Argentina’s “myriad of microclimates” coupled with none of the arcane European restrictions on blending the best ingredients from complimentary region and micro-climates.

This entry was posted in Meeting Abstract and tagged argentina, Chile, red blends. Bookmark the permalink.