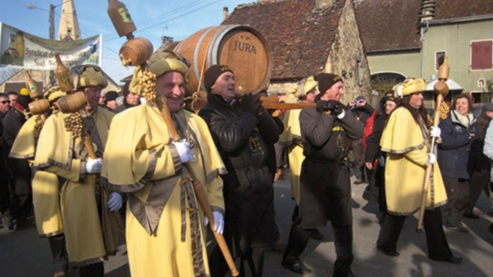 ( From BuyWine.com) The Jura region is quite small, a narrow strip of land sandwiched between Burgundy and Switzerland. Five grapes predominate. Three are traditional local varieties. Poulsard is a red grape used mostly in dry reds and sparkling rosés. Red Trousseau needs a lot of sunshine to ripen and only grows in the warmest parts of this cool climate region. White Savagnin (called Nature here) is used in all the region’s appellations for the idiosyncratic vin jaune(‘yellow wine’). The other two grapes are the better known Pinot Noir and Chardonnay (called Melon d’Arbois and Gamay Blanc here). They are used to make dry wines in a fresh fruity international style. 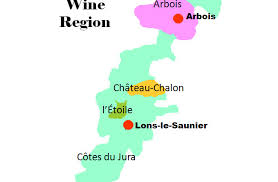 Vin Jaune, like dry fino Sherry that is aged with the yeast called flor resting on its surface, is matured in a barrel under a film of yeast, known as the voile. Vin Jaune shares certain aromas with Sherry, but it is not fortified. Jura is also known for its sweet Vin de Paille (straw wine), from grapes that have been dried on mats of straw, thus concentrating the sugars and flavors. Both Vin Jaune and Vin de Paille are made under the Arbois, L’Etoile and Cotes du Jura appellations. The best Vin Jaune is produced under the Chateau Chalon appellation. The Jura makes sparkling wines under the appellation Crémant du Jura.

The  main objective of this tasting is to explore wines from Jura.

A PDF version of the presenter’s slide show is here:VersâoFinal_Jura_Tasting213_ClubdelVino

These are the wines:

This is the menu: 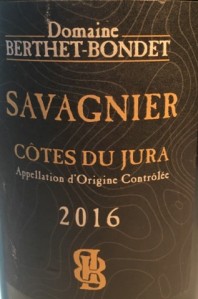 The Wine: Winemaker Notes: Made solely from Savagnin grapes, this wine is kept in the barrel for three years. Often less full bodied than the TRADITION it combines character with finesse. This wine comes to its best after several years and can be kept for 20 or 30 years.

The Winery: In 1985, Chantal and Jean Berthet-Bondet took over a domaine that had not been producing wine for 50 years and brought it back to life. The vineyards spread on 10 hectares, 5 in Chateau-Chalon and 5 in Cotes-de-Jura appellation. Chateau-Chalon possesses the noblest terroir in the Jura region. A composition of limestone and red and gray marl confers both power and great finesse to these wines.

Bondet uses indigenous yeasts, except for the Cremant. By precaution he prepares a “pied de cuve” to start the fermentations of the various cuves. This is made from a small quantity of grapes that ferments spontaneously. He verifies with the lab that these are the right yeasts before incorporating them into the cuves. Selected yeasts are used for the second fermentation of the cremant.

Farming practices: The domaine is certified organic. The wines are vegan (when fined, which is rare, it is with bentonite).

Read more at (only in French): http://berthet-bondet.com 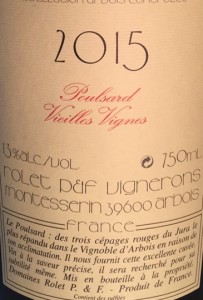 The Wine: (Le Bon Vin) Made exclusively from the low yield production Poulsard grapes and aged in casks for 12 months the Arbois Poulsard Vieilles Vignes has a nose red fruits, strawberries and cherry. On the palate there is a good balance of fine tannins making it an extremely pleasant wine. Ideal when paired with good quality poultry, smoked and grilled meats.

The Winery:  Domaine Rolet is established as one of the Jura vineyard flagships and its wines propose the whole terroir richness through the large range of Jura grape varieties. For Whites, Chardonnay (most planted grape variety in Jura) and Savagnin (prestigious Vin Jaune grape variety). For Reds, Poulsard, Trousseau and Pinot Noir.

Domaine Rolet is composed of 65 Hectares of which :

The medium age of the vineyards is 45 years old. 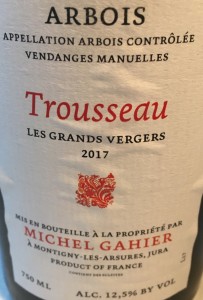 The Wine: (Livingwines.com) The vines for this wine are even older than those used for the La Vigne du Louis having been planted over 80 years ago. The wine is named after the lieu dit (parcel of land) where the vines grow. Here the gentle slopes are fully exposed to the sun allowing the grapes to ripen perfectly. The marl in which the vines thrive add minerality to the wine.

This is a very, very good example of a Trousseau wine having the delicacy that we associate with this fragile grape but also an extraordinary depth of flavor and a complexity that is intriguing. There are tannins present giving it structure but they are not aggressive. The wine is lively on the nose, has deep, deep flavors (hints of cherry and raspberry at the front of the palate and forest floors in autumn in the middle). It has a lingering mineral aftertaste. No sulphite is added.

The Winery: The Gahier family has been resident in the Jura since 1525. The family domaine is 6.5 hectares with the vineyards concentrated in the village of Montigny-les-Arsures, the place recognized as the home of Trousseau and a viticultural district that is acknowledged to produce some of the finest wines of the Arbois appellation.

Gahier harvests and vinifies his wines parcel by parcel. Each wine ultimately is derived exclusively from a single vineyard site. His whites are produced “sous voile”, although the “Les Crets” cuvée is less dominated by that process than the “La Fauquette” or the “Les Follasses” bottlings which spend considerably more time aging in barrel. The Savagnin and the Vin Jaune are both classic versions, a testament to the old traditions of the Jura where the whites are left in barrel without “topping up”. The reds are as mineral-driven as one could expect from the Jura, with a freshness and length that are compelling. The viticulture is organic (although not “certified”). The reds are destemmed; the yields are quite low (averaging 30 hectoliters per hectare). There is a period of cold maceration followed by a cuvaison of approximately one month with some pigeage done in the initial parts of the process. The wines, both white and red, are aged in old foudres and barrel. The wines are bottled without filtration. 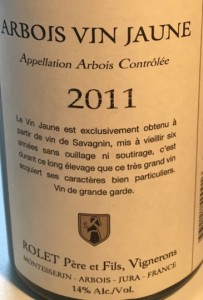 The Wine: Bright color of straw yellow. Powerful nose that reveals caramel  aromas evolving on woody notes. Frank attack followed by a generous mouth and a beautiful length. The Vin Jaune is produced solely from the Savagnin grape variety. After fermentation is complete, the wine is transfered to old barrels, which are not always completely filled, then stored in an aerated environment either above or below ground with natural temperature variations (i.e. no temperature control). The wine in barrel is not allowed to be topped up or moved for 60 months. A film or veil of surface yeas (similar to Sherry’s flor) develops over time and metabolyzes ethyl acetate and acids into aldehydes. At the sme time, this film protects the wine from direct contact with air. This controlled oxidation delivers a wine of unique ‘sherried’ characteristics and also conveys long ageing potential. Vin Jaune can last for decades.

The wine may not be bottled until 6 years and 3 months after the vintage (or January, 7 years after harvest). By law it must be bottled in an unusual 620ml bottle called a ‘clavelin.’

The Winery: (See notes above) 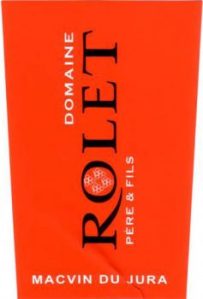 The Wine: Macvin du Jura is a sweet wine appellation of the Jura region in eastern France. In geographical terms it covers the entire region, although it accounts for only 3% of Jura’s total wine production.

Macvin du Jura is a powerful vin de liqueur. It has been produced here for more than six centuries, although it was only granted its own appellation in November 1991. The modern-day version is aged in oak barrels for 12 months before release, and is made from late-harvested grapes. All five of Jura’s key grape varieties are used in the production of Macvin i.e. Chardonnay, Savagnin, Poulsard, Pinot Noir and Trousseau. Most Macvin is white, although some reds are made, using Trousseau and Poulsard.

The eau-de-vie used to stop the fermentation mid-process (a method known as mutage) must be made from grape Marc produced in Jura, and must have spent at least 18 months in oak barrels. The appellation laws also stipulate that the eau-de-vie used must be produced by the same winery as the sweet base wine to which it is added.

The Winery: (See notes above)