The  main objective of this tasting is to appreciate the differences between a varietal wine made of Cabernet Sauvignon and blends based on the same grape.  To minimize climate and terroir differences, the wines are of similar quality, from the same geographical region but from different wineries .  The participants would attempt to identify and differentiate the characteristics of each wine including a ranking of preference.  There is also a white wine blend for the participants to identify.

The Wine: Winemaker’s Notes: Indulge in the extravagant pleasures of Ménage à Trois Gold—an opulent Chardonnay blend like nothing you’ve ever experienced. Every glass offers an abundance of riches, from the wine’s brilliant gold color and luscious aromas to its deep, layered flavors and full, round mouthfeel. An irresistible fragrance of crème brulée, honeyed pineapple, and exotic floral notes rises from the glass, hinting at delights to come. On the palate, a wealth of ripe tropical fruit flavors meld with luxurious French vanilla and hints of sweet spice before culminating in a smooth, buttery finish. Brimming with beautifully integrated flavors and a sumptuous, seamlessly creamy texture, Gold is decadent indeed. So go ahead spoil yourself—you’re worth it.

Blend of: Chardonnay, Viognier, and Verdelho 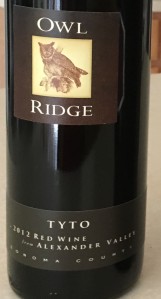 The Winery:  Alexander Valley is one of the key winegrowing areas in California’s Sonoma County. It is one of the warmer parts of Sonoma, with vineyards stretching from the edges of the Russian river up into the foothills of the Mayacamas mountains that separate Sonoma from Napa. Alexander Valley’s key grape variety is Cabernet Sauvignon, making vibrant, fruit driven wines that are less earthy than their Napa counterparts. The AVA covers the land along a 20-mile (33-km) stretch of the Russian river between the Mendocino County border and the city of Healdsburg. South of Healdsburg, where the fog-influenced climate is much cooler, the Russian River Valley AVA takes over, while Dry Creek Valley lies across the hills to the west. The separate but overlapping Pine Mountain-Cloverdale Peak AVA lies at the northern end of Alexander Valley.

The Wine: (Wine Enthusiast) While Cabernet Sauvignon is dominant, all five red Bordeaux varieties are represented here. Dark in color, a combination of black pepper and black-fruit syrup meets earthy and dry tannins. This structured wine needs time. Cellar through 2020.

The Winery: “Our organically farmed 94 acres Longwood ranch lies a stone’sthrow from the south eastern end of the Oak knoll American Viticultural Area (AVA) in Napa Valley. Our Vinyards are planted with the classic Bordeaux grapes Cabernet Sauvignon, Cabernet Franc, Merlot, Petit Verdot and Malbec along with Sauvignon Blanc and with a small amount of Chardonnay. Our Estate farms with sustainable and organic farming practices which include the use of cover crops and  bird habitat installations.” 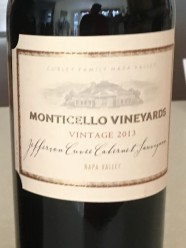 The Wine: The 2013 Cabernet Sauvignon Jefferson Cuvée is slightly austere and narrowly constructed, but has good dusty/loamy soil notes with red and blackcurrants. It’s medium-bodied, pleasant, but hardly inspiring. Drink it over the next decade.

The Winery: “We are a small winery producing approximately 15,000 cases of wine annually designated MONTICELLO VINEYARDS, CORLEY RESERVE and CORLEY. Our over-riding philosophy is that great wines are made in the vineyards. This is why we have made such a tremendous commitment to ownership of the most suitable land for our grapes. Already satisfied with the strength and quality of our Oak Knoll estates for our Chardonnay and Pinot Noir we set out in pursuit of Cabernet Sauvignon vineyards in the warmer districts of Napa Valley. 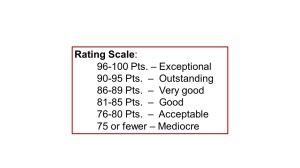 The Cabernet Sauvignon is one of the most important and famous varieties in the production of wines in the world. Developed in Bordeaux, began to be called by its name between the 18th and 19th centuries, and is found in almost all wine regions in greater or lesser degree. It is cultivated in warmer regions due to its slow maturation that requires warm temperatures during the long maturation cycle. But this gives more concentration and not too much alcohol. The variety is not suitable for cold climates since if it does not mature well and acquires a herbaceous taste like Sauvignon Blanc (another relative) or Cabernet Franc. On the contrary overripening can produce wines lacking in acidity and too sweet.

The variety is a low yield one so it is only used in wines whose high quality is the main objective. The grains are small, have thick skin and exhibit very dark color from purple to almost black. They have a high ratio of dyes and tannins to juice. Musts are dark and astringent (only the Tanat grape surpasses it in tannin) which promotes its mixture with other varieties to soften its astringency, improve color and highlight the flavors. Most common mixtures are with his relative the Cabernet Franc (from faster maturation and great fragrance), the Petit Verdot and Merlot to soften the tannins giving rise to the mixes type Bordeaux. Many prefer these mixtures over the strictly varietal wines (100% Cabernet Sauvignon) which can be very austere or sober for some consumers. In Australia, they have developed excellent blends with Shiraz which is a more spicy variety.

Wines of this variety are a dark red to purple in color with deep violet tones when the wine is young that turn to a deep orange veneer or brick color as the wine ages. Its aromas when young are predominantly currants or blueberries (black berries) and when old are more like wood oak, coffee, vanilla and tobacco. The flavors of the young wines tend to be rough and tannic but they are softened by storage in new oak barrels reaching a delicate balance between fruit, tannin and acid with flavors of black fruit (plums and Cassis), oak, and vanilla. This balance is the characteristic of the great Cabernet Sauvignon. The best wines can age up to 15 or 20 years and improve in the process.

The Cabernet Sauvignon is the backbone of wines from the left bank of the River Gironde in Bordeaux blended with Merlot, Cabernet Franc and Prtit Verdot, there are the DDOs of high reputation as Medoc and Pauillac, St. Julien, Margaux, Haut Médoc Graves. In Provence mixed with Sirah to produce wines that will age extremely well. In Italy the grape is used to produce the Super Tuscan (blended with Sangiovese) and in the Piedmont and Sicily with the native Nebiolo and Nero D’Abola. The Cabernet Sauvignon is very important in the wines of Eastern Europe (Moldova, Czech Republic, Ukraine, Bulgaria, Romania). However, wines from these regions tend to be fruitier (more red than dark fruits) and less woodsy and less refined than the French. Spain is used to cut the Tempranillo (Rivera del Duero, Rioja and Navarra) and the Garnacha (Priorat and Penedes).

In the new world, the cabernets from Napa and Sonoma in California, in high demand, are fruitier than those of the old world and have an shorter aging potential.. In South America the Chilean Cabernets are famous (Concha y Toro is recognized as the largest owner of crop of Cabernet Sauvignon) fruity and less spicy than the rest of the new world still planted in their original stock not affected by the phyloxera. Mendoza in Argentina Cabernets also produces very high  quality Cabs. In Australia the region of Coonawarra in South and Hunter Valley produce excellent full bodied Cabernets often combined with Shiraz.

There are various other places to read more about Cabernet Sauvignon.  The presenters recommend these sites:

This entry was posted in Meeting Abstract and tagged blends, Cabernet Sauvignon. Bookmark the permalink.