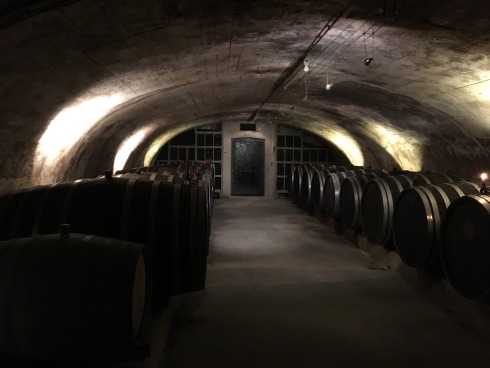 The  tasting is limited to only one wine proposed by the presenters according to the existing program that focuses on varietals.  In this occasion, it is a Mourvedre.  The main objective of the tasting is to find out the salient and specific variety features and the character of the wines it produces. 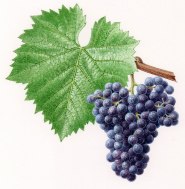 The Wine Folly states that : “If you love Cabernet Sauvignon then Mourvedre is your bag. Mourvedre (aka Monastrell) is a full-bodied and rustic wine that originated in Spain. Rumor has it that the seafaring Phoenicians brought it over as early as 500 B.C. Seemingly obscure, Mourvedre is actually used quite often as a blending grape in popular wines such as Châteauneuf du Pape. It’s one of the major grapes of the Rhône along with Grenache and Syrah.”

The menu is up to each participant discretion

Information on the Wine 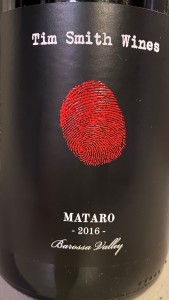 The Wine: This wine is a blend of 2 vineyards-the oldest is about 140 years of age, the younger one is about 70 years of age. We are led to believe that the older vineyard is about the second oldest Mataro (Mourvedre) vineyards in the world. The wine is picked typically at about 13.5-14 Baume. The fruit is destemmed and crushed and fermentation commences using naturally occurring yeasts. The fermenting must is kept on skins for between 10 and 24 days, depending on the vintage and extract from the skins. The must is pressed via an air bag press to avoid over extraction. Ageing is done on larger format French puncheons (500 litres).

Winemaker Notes  A blend of 3 different vineyards, aged up to about 130 years of age. All are low yielding, and on 3 distinct soil types. The Kalimna block (130yrs old) is on grey sandy soil, almost like a beach. This provides great fragrance and perfume. The palate is quite light and has soft, fine tannin. The Penrice block (50yrs old) also has great perfume, but a more soulful palate. Soils here are classic Barossa Valley floor, ie rich dark loam. The third block, in Greenock, has great sub-regional mid palate focus, with a slightly less aromatic profile. Notes of black pepper, dried tobacco and flavors of black olive, blackberry bramble with a soft oregano finish. Soils here are characterized by light yellow loam, with ironstone flecks. The sum of all three sites produce a wine with lifted perfume, and great mid palate drive. Old world winemaking methods, larger format French oak, unfined/unfiltered.

James Suckling Tim Smith’s touch with Mataro is a deft one, sending it into ever more fleshy, fruitful and attractive territory. This is packed with red-plum and tarry aromas and moves to a ripe, rich and sweetly fleshy mode on the palate. Plush and sultry

The Winery:Established in 2001, and with 33 years of hands on experience, Tim Smith Wines is a Barossa Valley-based producer of wines that we consider our region to excel at growing. “We make only the wines we genuinely enjoy drinking ourselves (sorry, Rosé drinkers).We are unashamedly influenced by the great producers of both the North and South Rhone Valley in France, but have a New World understanding of the techniques that we believe work best in our region. This understanding comes as a result of working as a winemaker with some of our regions most respected wineries, and numerous overseas vintages in a number of countries; always watching, always learning, and always challenging even our own wine making approach. Our wines are at once rich, polished, and structured for longevity, but with a brightness of fruit that invites early drinking. We are still unashamedly heavily influenced by the wines of the Rhone Valley, but with a very healthy respect for our regional Barossa wine style. We see no point in trying to reinvent the wheel when the wine styles and regionality we enjoy in the Barossa has been around for nearly 180 years; the region must be doing something right. However-the wine geek in me cant help tinkering and responding to our different yearly vintage challenges.

Some participants tasted other Mourverdre-based wines these were:

2017  Mourvedre  El Dorado, In Hand, The Whiters Winery, Santa Rosa, Sonoma Valley. A deliciously rich but vibrant blend of around 70% Mourvedre plus Syrah with around 30% whole clusters for extra spice and structure. $24

Most wine historians agree that Mourvèdre is likely to be Spanish in origin, though its exact history is difficult to pinpoint. The variety was probably introduced to Valencia by the Phoenicians around 500 BC. The French-adapted name Mourvèdre probably came from Murviedro (Mourvèdre in Valenciano, nowadays Sagunt) near Valencia while the Spanish name Mataró is thought to have come from Mataró, Catalonia near the modern-day city of Barcelona. Despite this close association with Murviedro and Mataró, the grape became known in Spain as Monastrell for reasons that are still unknown though Oz Clarke speculates that a “neutral” name may have been chosen so as not to offend the local pride of both regions.

Mourvèdre had a well-established presence in Roussillon region of France by at least the 16th century when still part of Spain (until 1659) where it spread eastwards towards Provence and the Rhone. There it had a well-established foothold until the phylloxera epidemic of the mid to late 19th century decimated plantings. As the French and other European wine regions recovered from the phylloxera scourge by grafting Vitis vinifera varieties to American rootstock, it was discovered that Mourvèdre vines did not take well to the grafting and many vineyards were replanted with other varieties.

: Bandol(France) and Alicante (Spain) are dominantly Mourvedre. The Rhône, Provence and Corbieres regions use Mourvedre as a blending grape.

Mourvedre is a meaty and full-bodied red wine. The smell of Mourvedre is an explosion of dark fruit, flowers like violet and herbaceous aromas of black pepper, thyme, and red meat. In regions such as Bandol, France and Jumilla, Spain, Mourvedre wine can have a very gamey taste. This smell can be a turn-off. The French call it animale. Some people, confronted with this distinctive odor, will wonder what fell into the glass and died. Mourvèdre also tends to display a leathery quality and a degree of earthiness, and while the wines it yields do not lack for fruit—they are usually marked by plum, raspberry, or blackberry flavors or various combinations thereof—they can be a bit austere.

Some believe the unctuous aromas in many Mourvedre wines are in part due to a wine fault called reduction. Because of this, Mourvedre benefits from decanting and is best enjoyed at around 67-71 °F.

Southern Spain. Monastrell is a major variety in the regions of Jumilla, Yecla, Alicante and Bullas. The warm dry climate produces wine with bold fruit flavors and even some tart and black olive. That said, there is exceptional value to be found here. Blackberry, Black Raisin, Mocha, Tobaco Smoke, Black Pepper

Bandol France. It’s said that Mourvedre thrives with is head in the sun and feet in the sea, so it is no wonder the grape  shines on the south-facing slopes of Bandol in Provence. By Law, the wine must spend at least 18 months in oak barrels , lending to this wine’s rusting elegance. Black Plum, Roasted Meat, Black Pepper, Cocoa Powder, Herbs De Provence

Full-bodied red wines like Mourvedre beg for rich foods to absorb the high tannin. Look for meats with lots of umami like beef short ribs, pork shoulder, barbeque, lamb, rabbit, pork sausage and veal. The spices that complement the floral character in Mourvedre are regional spices found in Provence, France such as lavendar, rosemary and thyme.

Vegetarians should look towards lentils, wild rice and shitake/portabello mushrooms for their flavor base to create a dish for any full-bodied red wine. Using black pepper and soy sauce is also a great way to add umami to vegetarian cuisine.

A Perfect Grape for Hot Regions: Mourvedre is a very structured and thick-skinned grape that ripens very late in the season. It is moderately drought-tolerant, making it an ideal grape for warm climates.

Undervalued It’s Super in Spain: Southeastern Spain was hit by the Phylloxéra louse in 1989. The vines have recently recovered and are now being offered in the US for bargain basement prices. You can easily find $10 Monastrell from Yecla, Jumilla and Alicante.

This entry was posted in Meeting Abstract and tagged Barossa, Mataro, Monastrell, Mouverdre. Bookmark the permalink.